Thus far this month, I’ve tackled a few smaller quilting projects.  One of which started out as a simple conversion of a bedskirt into a set of valances for Dale (of the Sunflower Dresden quilt fame).  But then I had fabric left, and if you do any kind of scrappy quilting that you can’t let so much as a perfectly good 2 inches of fabric go to waste, let alone any amount larger than that!

So I made a normal pillow case, trimmed in “valance plaid” and then I had more fabric so I made a few quilt block decorative pillows too.

The blue and yellow floral is new, but the dark blue and yellow are scraps from her sunflower quilt, the light blue from my first quilt.  Both smaller pillows are backed in her “valance plaid” to help tie the whole ensemble together. The inside pillow forms were made from some of the plain white that was a part of the bedskirt.  So all told I bought a yard of fabric, and ended up with 3 pillows, 3 valances and I still have a smidgen left. 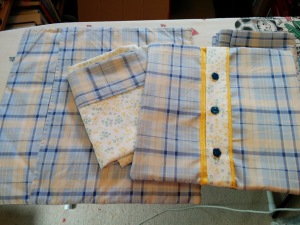 Smaller pillow features my first ever button holes on my sewing machine too!

First off, I decided to join in a Quilt Along (QAL) with an online group.  (Details here) Now the joining wasn’t the bad part; its probably more of the good part since I don’t belong to a quilting guild or tend to get very social with my knitting and quilting.  But… the shop was out of the recommended interfacing, and the line was forming behind me at the cutting counter so in the words of the third knight in the Temple at the Canyon of the Crescent Moon, I chose poorly.  I chose a non-fusible/non-sticky kind, and its too narrow to do a whole block at a time.  I am attempting to forge ahead with some spray adhesive to see if I can make it work.  Thus far I’ve laid out the first block:

Here’s a photo while I was waiting for the adhesive to dry. You can see where I will need to seam the two sections together.

Like most of my quilt projects, I tend to take several cell phone photos of it as a work in progress and post them in an album.  Which you can check out here.  Wish me luck!  I might just need it.

In other mixed good/bad news, I did forge ahead with three more stars on my giant star quilt.  I am not super thrilled with how some of the points came out, and was feeling kinda crummy about it.  I do think the later pillow project actually helped, as it has similar cuts and came together very well.

A Green and two blues

A while back I fell in love with a certain pattern for a shawl on Ravelry that uses Brioche stitch.  So this year I told myself I was going to learn.  And with the help of some left over Seahawk Action Green, I started with a nice beginner brioche scarf. 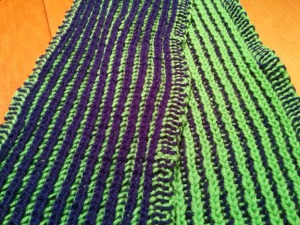 Brioche doesn’t look like it has a wrong side. Just a side of a different color.

The tails are done in single color.

Now I just need to find the yarn I want for the shawl project and I’m all set.  I’m looking for a spring green  for one color and autumn spice for the other.

So I really liked the yarn I used for my Spring Thaw Shawls, (which was Paton’s Lace btw) although with the mohair it does have a bit of a halo that may not be ideal for all designs, and its a bit more crabby about any frogging.

Since it had worked out so nicely, I bought some more in other colors.  A simpler repeat pattern lace shawl is actually an ok trip project since you only have to pack a skein or two to work the whole project.  Whilst I was on holiday I started up a Vernal Equinox Surprise Shawl, and based on its name I decided to go with the “Sachet” color way, which is white and sage and plum.

I cast off on the 5th.  The thing with lace is it benefits incredibly by blocking, but non-knitters or newer knitters don’t always see how you got to pile of yarn fluff to the more nice looking lace.  So I’m going to start out this post with an unblocked photo.

Taken at night with poor lighting.

Issues of lighting aside, it does look like a lace shawl, not super lacy but its not something repulsive either.  And then you block it.

For the record, it is an overcast rainy day.

And it goes from this textured ripply shawl, to a true lace shawl.  And like the Grinch’s heart, it can grow a few sizes too.  You does not need to be super fancy pants to achieve a good block, though to be honest it may help; I don’t know.  I just use towels and Sewing Pins and sometimes a few bits of old school acrylic yarn in the case where the edge is super loopy like this one.  The yarn is my blocking wire that stretches the loops out evenly so I don’t have to pin every single loop out. 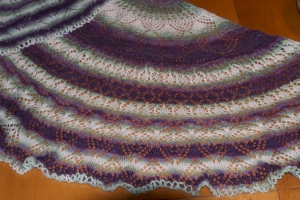 There are several different lace repeats in this shawl

This shawl was a bit difficult for me to finish… not because of the pattern, but because I wasn’t really making it with a giftee in mind and started to have good ideas about what I wanted to do with some of that Alpaca yarn I just got.

I did not even finish trimming my cast on tail before taking this photo…. ¬.¬

But I don’t like to leave too many projects undone, so I finished it up, and it shall be folded up nicely to await the perfect person for it to go to.

I can fold half circle lace shawls AND fitted sheets.

Knitting with recipient in mind is a huge motivator for me, but sometimes you find you need to use your yarn and just knit something, and in the long run it seems to work out alright.