Large projects like sweaters and blankets take on a bit of their own life.  Probably from soaking up just how much life happens during the time it takes for them to get made. Unlike many of my posts this one is probably a bit more personal, so don’t feel bad if you skip the reading for the photos. (And yes…. I take terrible selfies)

I started last November around the same time I decided to pursue some health issues that had been bothering me.  More recent symptoms had given me a bit more of a clue as to what to look into.  I’d managed to get past the armholes and was still working away at the body (Thankfully at this point with the lace panel memorized!) at my first endocrinology appointment in January. 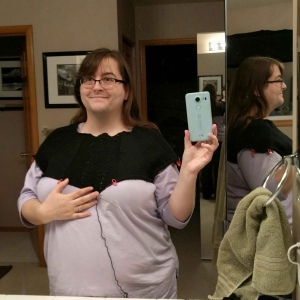 It was at that particular appointment I got the news that my blood sugar was particularly high and I may want to try losing some weight to try and improve that result additionally it may have some impact on my other issues.  Meanwhile scans and labs were ordered and just maybe I’d have a few answers come February.

I was not particularly hopeful with the weight loss idea having been through some of the miasma of magical thinking that can follow around the idea of how such feats should be undertaken.  (Never eat X!; Only eat Y!; Fad-diet-of-the-moment is the only way to go!; Everything in life will be perfect if you just make it to this magic number on the scale)  But trying and failing had a bit more possibilities than not trying and failing, so I set out to try.  About a week in, I mentioned to a friend I was dieting (literally that single word in a list of things) in passing as part of a “what are you up to?” query.   Then a short time later watched as they went on a public tirade about dieting (some of which I agree with since it was in reference to the magical thinking bits I mentioned earlier) that ended in a don’t ever speak to me about this subject.

I won’t lie, it felt very personal and hurtful. It still does.  But you wipe your tears and try to keep on doing what is best for yourself. 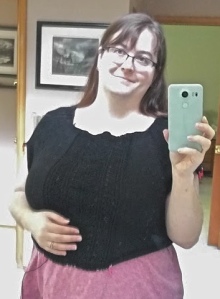 Finally with only about 20 years between the first time I asked “Is this normal?” I had an answer.  Its PCOS. And while its not a get diagnosis and get cured kind of issue, it does have options to deal with symptoms. There is a certain relief in the knowing, and a small bit of hope.

With all the spring activities and start of Sock Madness, it took me up to the very end of March to finish the body, but on the plus side I did manage a somewhat decent selfie for the progress photo on the blog. And a week later I made the goal my doctor had suggested. 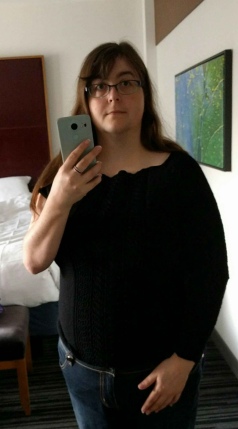 By May 11th when I finally finished the first sleeve, my Isabelle was becoming well traveled; Kansas, Oregon, and even Vancouver, BC.  At least knitting projects don’t need passports. I made my own first goal of “well if we can make that, let’s try for 5 more.”

Normally, I’d have put Isabelle on pause to work on my monthly Hobbit Scarf chart, but at the encouragement of my husband (future scarf owner) I cast on the second sleeve. I kept at it until the last competitive (for me) Sock Madness round which took me 10 days to do over 200 bobbles on just one pair of socks. Then right back into my Isabelle.

It took about 14.5 skeins of my vintage, thrifted, no yardage listed yarn (out of a possible 26) to finish so my estimated materials cost is about $23, although my labor is an entirely other matter. But by the last day of May she was finally off the needles and into the soak and then block stage.

Although I worried about the fit with my changing body, and the more immediate panic when the soak had created the stench of moth balls out of my vintage yarn, Isabelle fits. The soak smell has disappeared.  Its beautiful. As for that other stuff, well… its still a work in progress. 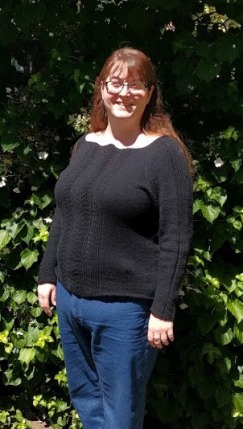 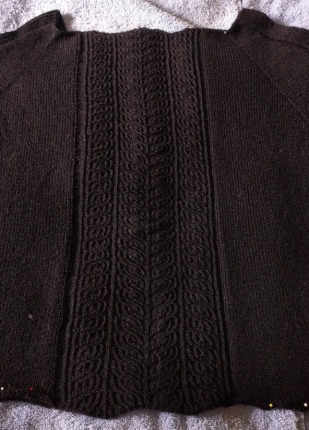