Great Googly-Moogly! I feel like everything and nothing has been happening around here.  I actually did have a plan to update in February, but that went completely out the window due to a impromptu trip to Kansas to help out family for a couple weeks.

I did mention I was going to knit up a test knit shawl.  Its a rather different design as its a center out triangle of 2 color brioche.  The pattern has been released as Arrakis. 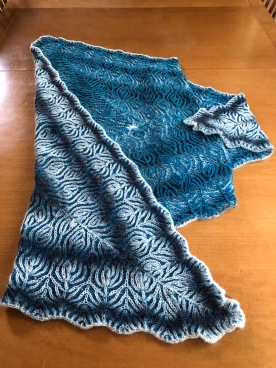 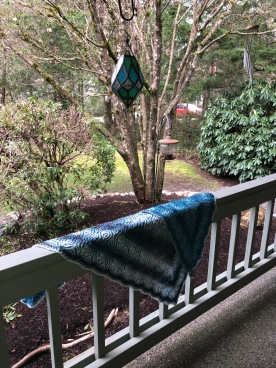 Apparently it was a multi-color time frame as I’d just finished a two color shawl on my holiday trip, and then took up a two color brioche sample knit for my nearest local yarn store, The Nifty Knitter. 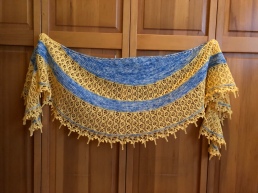 Teaser Preview, See it in the Shop!

Which means I did not get either the Havar sweater dress done or the Sweater club sweater done…. and now its Sock Madness season.  Which I did finish my qualifier socks (and in fact are wearing them today!)

Which brings my finished knit yardage up to 1.7 miles thus far this year, even without any new sweaters. Which kind of negates the whole not knitting 11 miles again this year thing if I keep going at this pace.

One of the things I like about the Sock Madness group is that they give prizes for things other than the major end goal of fastest knitter of socks this year. Things like the ability to overcome some hurdles along the way or taking a great or amusing photos which is basically a general participation enjoyment.  The majority of the prizes are donated from fellow participants. The first year I didn’t know what to expect and joined because it was free, and you’d end up with all the patterns, so why not give it a shot.  It was the year of my wedding and I was knitting up all my flying piggies, and my post about knitting up flying piggies won me a prize of a couple skeins of yarn.  So I try to donate prizes now when I can.

One of the things I like to make for prizes and gifts for knitters are project bags.  And I’ve recently finished off a small batch. (And now I need a few more supplies to make another batch)  This style is a good size for a take your sock project with you. 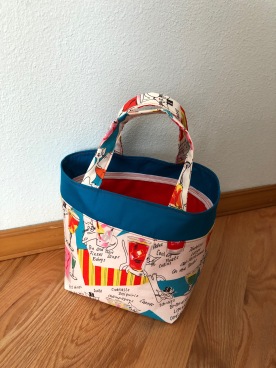 At any rate… I am guessing the next post update will be socks.  And I may have to decide on which sweater for my between rounds project.  And just to make it more interesting, the email to pick my next sweater yarn shipment color showed up this morning!