So a few weeks ago I posted a few teasers about some of my holiday projects.  And now that they are finally in the hands of their new owners… It’s time to give them their due.

First up is a project I mentioned over two years ago when I bought the pattern at the 2014 shop hop. Once the post wedding frenzy had calmed down a bit I realized that holidays were coming a bit sooner than a crafter hopes for, and in sorting out my gifting plans, landed on top with a hope that if I really worked on it, I just might finish in time.

My embroidery blocks are stitched onto several white/off white on white/offwhite Prints. Various trees, snowflakes and swirls. The remainders and scraps of which got paired with some red prints in a scrappy sampler style border. You can see pinwheels, churn dash, shoo fly and Dutchman’s puzzle blocks in there.

For the back, I chose to piece in three blocks, including one for my gift tag, that I hope looked a bit like some falling flakes.

Here’s a few detail shots.  There are also several WIP photos in the WIP gallery.

The recipient called me up to tell me she cried when she opened it… so time well spent!

Secondly… I finished up my Super Mario QAL quilt without Ben being aware I was working on it since my last post about it.  Got it wrapped and took it with us to open on Christmas Morning.

I had three more blocks and some custom printed level fabric for the back side.

He also got a knit lego man and a pair of socks that he picked out the yarn for, and promptly wore on the first day of our return trip home. 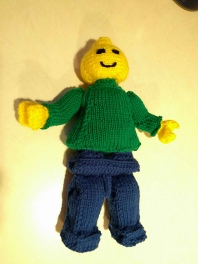 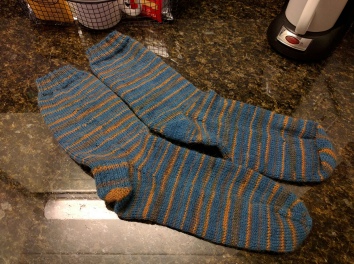 Which is probably why I am now double knitting him a lace weight single ply Hobbit scarf.  Which I managed to get through the first chart of 11 (8o our of 810 rows!)