So a bit ago I made a shawl, and each section started as partial cast on and partial picked up stitches. 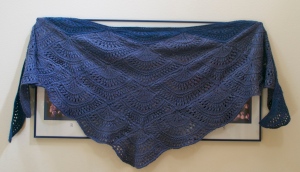 I started out so afraid of cutting up my yarn….

Then I migrated to the 3 leaf counterpane, where every pane was a separate piece that had to later be joined together.  Its also one on which I fiddled with the pattern slightly, and only had enough yarn to make a 9 pane piece.

Conquering my fear of joining pieces together!

And today… I’m finally presenting my very first counterpane pattern, which I am naming after a very important person in my life, my aunt Debora. 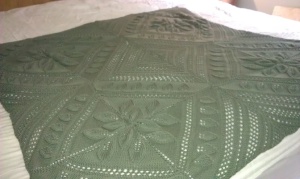 This was an interesting experience as I pulled out and restarted the original pane several times until I found something that combined the elements I wanted.  On the second pane, I documented each rows stitches as I attempted to recreate my work.  Then for panes 3 through 16 it was stitching from the pattern and adjusting the notes so that they made sense to someone other than myself!  For this 16 pane blanket, which was gifted to my aunt Debora, it took roughly 10 skeins of Cascade Superwash DK weight.

A Closer view of the pane joined at the leaf points. 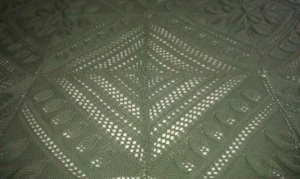 And a view of the panes joined at the lace points

If you would like this pattern, you can get it from the patterns page (linked above) or here: DeboraCounterpane (PDF file)

This pattern is freely available, but if you enjoy it and feel so compelled, my aunt Debora and I would be pleased if you would give a donation to the American Cancer Society.

One thought on “Meet Debora; My First Pattern”