So last Christmas when I wrapped up Debora, I tied on my tiny version of the Bird in a Tree bird.  I’d made up one per the directions and he was very cute… but in the spirit of wondering if one could knit something up in size 5 embroidery floss I knit up the small version.

Tiny red was very cute, and the seed beads worked pretty nicely for eyes, which spared me the french knots… which is one of my least favorite embroidery stitches.  Red bird was a bit of a success… and so I accepted the challenge of knitting over a dozen more… which leads us back to… 14 birds in the hand: 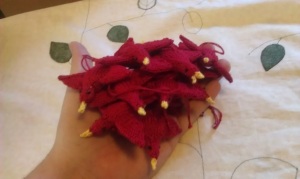 The rough equivalent of 28 in the bush birds…. which isn’t even the record for Pine Siskins at my feeder this past spring.

All of these birds were knit up on some of my smallest double pointed needles from a multipack of what I thought I might need at some point doing lacy socks or something.  Which I believe is the size 00 needles.  All I know is the whole time I was knitting I was worried I would end up bending them into new and unusual shapes. (Which only happened that one time!)  The floss was ok, but didn’t have much give, so if you dropped a stitch or messed up, it was pretty much a frog and redo process. 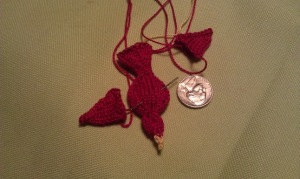 That’s a US nickel for size comparison

One thought on “If A Bird in the Hand is worth 2 in the Bush, How much for 14 birds in the hand?”