This morning I woke up a good hour early, and rolled over to peek out the window to gauge the time and…. snow!  Like a good inch or so, there was snow on the ground and the tree branches.  I was so excited I couldn’t go back to sleep!  I love snow… so much that relatives several states away will call to tell me when they get their first snows of the season.

But we were on stockings.  Ben and I have stockings… we hang ours on the knobs of the china hutch.  Its not that we don’t have a fireplace, with mantle, but we don’t have those stocking hooks… and frankly the way I try to stuff them its probably good that I can pull out the drawer below for added stability sometimes!

While I did not make quite so many stockings this year, Ben and I signed up for the Redditgifts Secret Santa Exchange this year and I knew I wanted to give our giftees some custom Christmas Stockings full of holiday cheer.

My giftee collects vintage hand fans.  So I thought a modified Grandmother’s fan design would be appreciated. 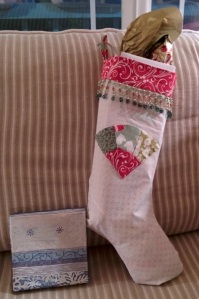 Stuffed so full I couldn’t even fit that last gift in!

Ben’s giftee really liked the Seattle Seahawks, which means I know have half a skein of “Action Green” yarn in my stash: 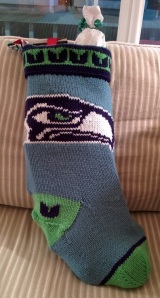 The Hawks are doing pretty good this year! Up to 12-2

And I did indeed make sure to put 12 feathers on the heel and cuff….

The back of the Hawk’s stocking featuring the rest of the wrap around design.

I do hope they like all their gifts, and as with the last gift exchange,  (Which was Star Trek in case you forgot!) I will update this post with any response from our giftees.

Meanwhile, my Santa was really quite on the ball… she has already sent me a great new knitting book called Woodland Knits.

Thanks again my Santa!

There are some adorable patterns in there to give me lots of ideas in the new year.  I say the new year because this week I was all about a pair of commissioned custom StarCraft2 Scarves.  And I’ve cast on the second of my sleeves on my Spoke Sweater.  So between the housekeeping and cookie making and early Christmas having…. I am knitting like a made fiend to see if I can’t get it done to wear Christmas Day.

Here’s a quick preview of the main body so you can see how far along I am:

Just needs some seaming, sleeves and a good blocking!

UPDATE!  My Secret Santa Giftee received and liked her gifts!

And so did Ben’s Giftee (who posted a whole album – click the title)  Ben also posted what he received here.