So as someone with a not so tiny fabric and yarn stash, I’m doing alright at crafting in a time of Staying Home for Covid.  It certainly doesn’t hurt that its also Sock Madness time so for brief bits of time I have specific projects to occupy my time.  This year I made it into Round 5, and we came up against a rather technical sock and I didn’t make it into the Final Five round Six, but I’m still plenty pleased with how I did since to me its all for learning skills and making socks. This year there was a significant portion of colorwork socks in their various forms. Here’s a few including the vibrant yellow of a warm up pair but just one of the three teal & aqua I ended up making with a fourth planned for someday soon.  But at least I have reduced some of my yarn stash right? 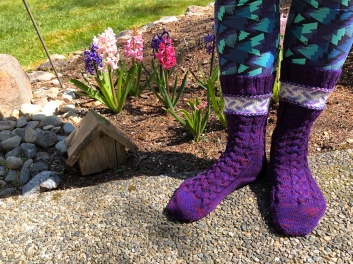 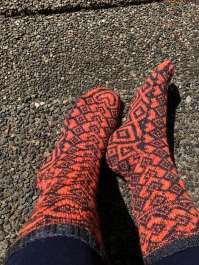 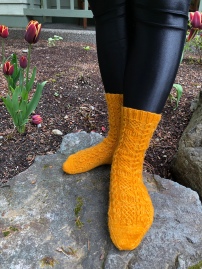 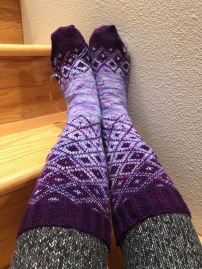 April was slated to be a pair of Hermoine’s Everyday Socks in my Mystery Stash Bust along… but the timing felt like I’d be running into other Madness rounds so I substituted in a pair of Morrison socks which were a DK weight.  Theses were on a yarn dyed by Black Trillium whom sadly is getting out of yarn dying. So I may have partook in the going out of business sale and this is also partially why I have such a stash.  In my defense… the socks and a couple of the skeins are for Ben so…. 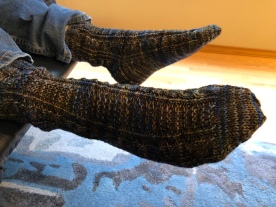 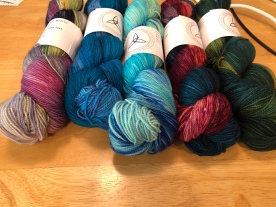 May is also Conan’s 17th birthday month.  So to tackle his gift it was decided to make him a heated car bed.  You can buy a basic heating mat to place under the cushion in a traditional store bought bed, but you can’t just expect a cat that regularly sleeps on Stargate beds to sleep on something from the store… so into the fabric stash I dove.  I will admit I am a fan of some of the novelty cat prints and came up with a cat and mouse design that seemed big enough for the project.  I quilted the cat fabric through two batting remnants into a fabric that back in my much younger days started out as a sink skirt in an apartment with almost no storage. (Reuse!)  Then I added bolsters with more cat fabric on the interior and a durable Sunbrella fabric on the exterior.  At the bottom I made a pillow of some fleece remnants and stuffed that with overlapping edges and scraps of fleece batting and pillow stuffing. 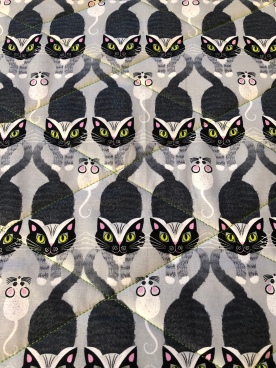 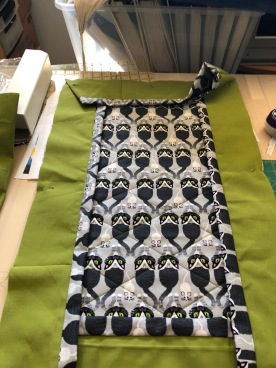 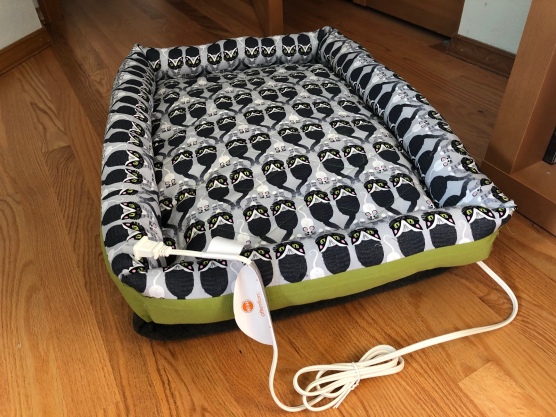 The heating mat slides between this pillow bottom and the quilted topper.  The bed was a pretty big hit and is large enough for at least two snuggling orange cats. Conan is pretty good about sharing with Kaylee 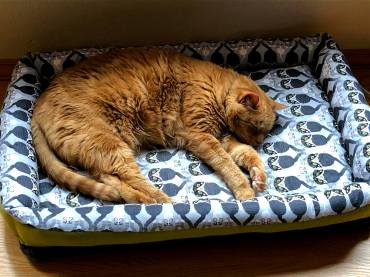 Quite some time ago in 2015, I picked up several Row by Row quilt kits and even went so far as to assemble an umbrellas and a rain boots set of rows.

And that was as far as I got but with me trying to organize my stash and use up… I found fabrics a couple years back that also exemplified the rain and with a bit of pondering and math I decided I could make something of them if I turned those rows back into blocks. (Recycle!) So I pulled the seams and did a bit more math and am able to present at least the center of a Rainy Day quilt top! 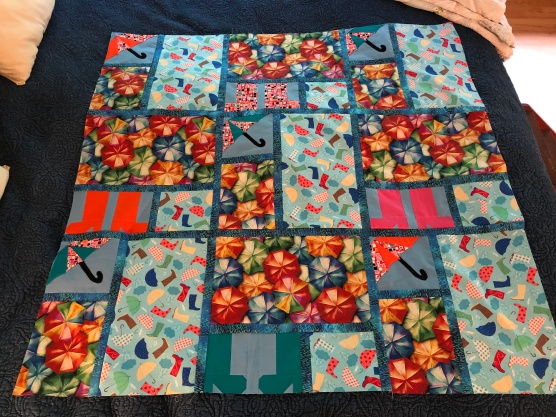 Sadly while I do have enough of the Rain drops trim, I am mostly out of the Umbrella tops fabric (and the novelty toss) which I think would be an ideal border so its going to probably sit a bit longer until shops re-open or my online wandering find a new solution.

Which finally brings us to the repair portion.  This happens with socks… sometimes far sooner and more often than I would hope for, but there it is. I know I have posted before about the use of duplicate stitching and making patches to fix them, but my husband presented me with a unique problem recently in his Bamboo socks I had just made up last October.  He wore BOTH the toe soles out of them! 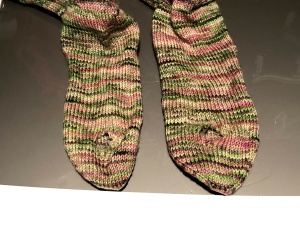 So I decided it would be best just to take out that portion of the toes and reknit them back from the yarn I still had in my partial balls stash.  (I’d like to say this is the reason I keep them but honestly its that I rarely make up scraps projects)

Step one is pretty easy, you just snip out the toe and then start unraveling like you were unhappy with it, until you end up with a row of loop stitches.  Then thread your needles through the loops, join your yarn and reknit back down the toe.  Be sure to look carefully which way your yarn is on your needle as I find I tend to pick up twisted and then need to knit the first row through the back of the loops to get it to untwist. 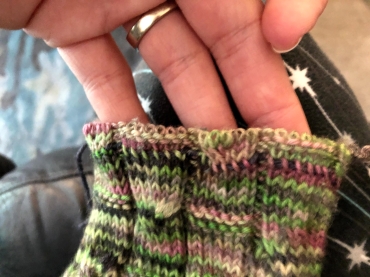 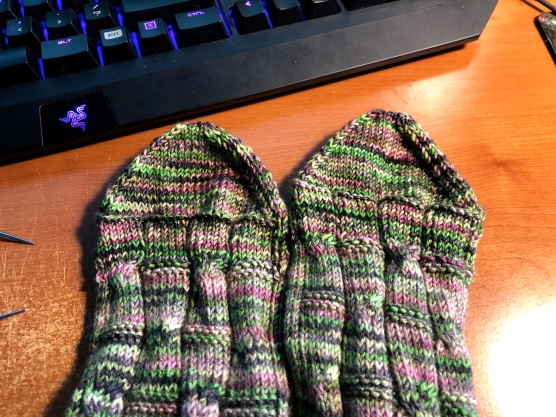 Now, yes there is some color variation due to wear, but a few washes along and it will even out a bit more.  You can also (I did this on one of them) use the yarn that you pulled out of the toe and duplicate stitch reinforce that area where the hole formed to give it a bit more sturdy of fabric.

Whew…. that was quite a lot going on in April and early May… and I didn’t even get into the next sweater of the year… guess I’ll save that for next time. 🙂