Hey! Listen!  its only 7 days into the month of February and I’ve gotten my stocking done!  I started this one with the desire to have a slightly nicer cuff.  So there are bobbles and Triforces.

How fitting that the Triforce is encircled in a stitch called the Trinity Stitch!

After that I went with a classic white stocking with a green heel and toe to complement the cuff.    This one I went a bit longer…. and then finished it off with a Link on one side and a Princess Zelda on the other.    I am not super happy with the pink of the faces and arms so I may redo those into a slightly darker shade to differentiate them more.  (Mental Note:  Add “flesh” to yarn shopping list)

Well finally… after many trials and a few frustrations… the Video Game quilt, aka my first quilt) is finally done!

So here is a ginormous photo so you can appreciate it in all its glory.  If you click on the photo below… the original image is quite large.

I love so many of these squares. I only wish I knew when I started all the things I know now so I'd be better at the execution of them! 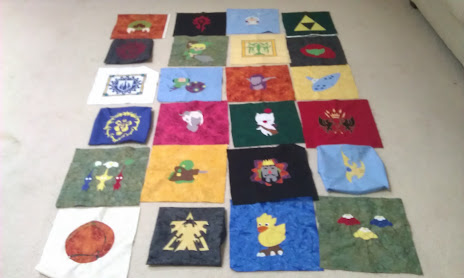